[vc_row][vc_column][vc_column_text]The Skinned Rolled Bacon is one of the Italian Classical cured meats, it’s a lean, spiced and long seasoned belly pork. It’s assembled by two pieces of skinned pork belly which are rolled together. When cut it’s red with evident white inter-muscular fat.

To produce the Skinned Rolled Bacon there is chosen lean pork belly largely trimmed which is skinned and depraved from the excessive fat;

the salting process is done through adding salt and a mix of spices among which stand-out garlic, pepper, and rosemary.

The salted pork belly is placed in appropriate salting tanks and is left in walk-in coolers for at least one month during which the meat absorbs the salt and flavour from the mix of spices;  after the salting phase the pork belly is removed from the brine and covered with a mixture of garlic, rosemary, and pepper, later two pieces of pork belly are rolled together with white paper for food, and strictly tied. After a short step of hot drying, they are hung in well-aerated rooms to seasoning.

The seasoning of Skinned Rolled Bacon can least from two to four months, depending on diameter, and at the end of it, the product is ready to be consumed.

Along with the Spread Bacon, and Coupled Bacon, the Skinned Rolled Bacon is one of the cured meats produced from the belly pork which is one of the tastier parts formed by the muscle fibres and veins of unsaturated fat; The Salumificio Artigianale Gombitelli proposes to its customers.

The Skinned Rolled bacon is the most seasoned bacon that Triglia family produces. It has a sweet taste with a marked hint of spices with which it’s processed, and the slice melts in the mouth in contact with the palate.

It’s perfect as a starter, for stuffing sandwiches, or focaccia bread.

It’s one of  the ingredients that has not to lack in the kitchen pantry of cured meats lovers because it has many uses in cuisine for recipes as “carbonara”, “amatriciana”, and the classic Tuscan side dish “peas and bacon”.

The Skinned Rolled Bacon, for its big dimension and for the lack of the pork rind, is particularly easy to manipulate.

We recommend you to cut it with the slicer because it not requires to be skinned during the slicing.[/vc_column_text][vc_column_text]

DOCG wine from Castagno Monferrato (Asti) has a ruby red colour with light violet reflexes, sometimes tending to orange. An intense, persistent scent, slightly aromatic, fruity and spicy with suitable ageing; taste dry, round, harmonious, sometimes with a fragrance of the wood.

Be the first to review “Skinned Rolled Bacon” Cancel reply 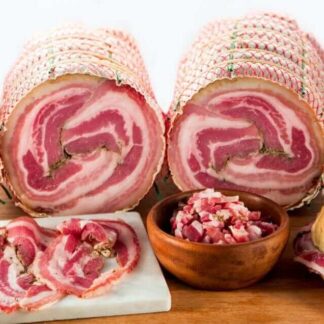