When a centuries-old know-how marries with the innovation of technique and taste, it can not but be a product without equal, capable of surprising and exciting even the most refined and demanding palates.
The Smoked Lard Cream of Salumificio Triglia of Gombitelli combines the ancient tradition of this portion of Tuscan territory that embraces the high Versilia and Garfagnana, to grind the lard to keep it longer under glass with the art of smoking natural.
A new flavor for a versatile product that finds a thousand uses in the kitchen and dominates, undisputed prince, in the buffet of rustic aperitifs, spread on hot bruschetta or as a jolly ingredient for exceptional gourmet sandwiches.
Sold in handy 200 grams glass jars, the Smoked Lard Cream is ready for use because it is made at the end of the brine process, after the lard blocks have been smoked cold and seasoned.

Smoke and Brine: a winning combination

The Cream of Smoked Lard of Salumificio Triglia is a veritable alchemy of flavors. It is produced by grinding blocks of smoked lard to which a particular mixture of spices typical of these areas is added. A long and harmonious process that starts from the smoking of the lard pieces that have come to the end of their traditional processing, before maturing.
The smoking, which goes from 12 to 24 hours, takes place in special cold working machines – temperatures never exceed 30 ° C and never fall below 12 ° – and which slowly subject the meat to warm steam and fumes intoxicants of natural beech wood, laurel and juniper berries. This process inflates the fibers of the blocks, giving the lard additional levels of flavor and that unmistakable taste, immediately recognizable.
Only after smoking, the lard blocks so “flavored” are subjected to the long maturation phase in special cold rooms, for a period of no less than ten months.
It will be only at the end of this time that the leaner ones will be chosen. The rind will be removed from them and the delicate grinding phase will be carried out – which will be very fine to obtain a “cream” ready to be spread – and a further spice composed of garlic, pepper, rosemary, chilli pepper, nutmeg, nails of carnation and cinnamon.

DOC straw-yellow wine with golden tints from Friuli; full aroma with the hints of ripe and tropical fruit- pineapple, melon, banana; in the mouth starts with an extraordinary harmony, giving a long and persistent aftertaste. 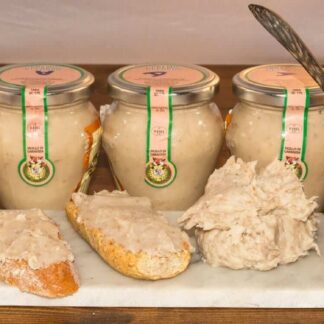