Last entry to be part of the line of “smoked Triglia”, the Smoked Coppa stems from the will of the master butchers of Salumificio di Gombitelli to combine the centenary tradition of salami, typical of this village perched on the hills between Versilia and Lucca, with taste innovation.
A courageous choice that “reinvents” a typical salami of Italian production – the cup or capocollo – introducing on the local market, typical flavors of more Nordic or American realities: the smoked is in fact widely appreciated and widespread especially in the United States and in the countries northern and eastern Europe.
A “new meat” then, however, realized, always in full respect of the craftsmanship of the finished product and the absolute quality of raw materials starting.
The smoked cup is obtained by subjecting the capocolli (which are produced by selecting only the leanest parts of the pig’s muscle at the neck, between the attachment of the head and the fourth rib of the carré) to a slow cold smoking that provides the exclusive use of zero-kilometer wood, harvested in the woods around the town of Gombitelli.
It is therefore a 100% natural smoke, made in particular with beech wood chips, bay leaves, pine needles and juniper berries, without the addition of any chemical product such as “liquid smoke”.
It is a synthetic agent used in industrial processing processes that gives the meat tastes too strong and decisive that in the long run tend to cover its natural scents.
The natural cold smoking instead aims to enhance and enhance the flavors of meat. During the period in which they are subjected to the smoking process, the cups are exposed to a temperature that varies between 10 ° and 30 ° centigrade: a real “slow immersion” that in addition to giving the meats the classic “strong taste” contributes to the preservation of their meat, preserving them from the onset of the bacterial load.

Smoked Coppa: how to serve and match it

The Smoked Coppa is cut with a compact mass of red, characterized by the clear distinction between lean and fat parts that can vary from white to rosé. From the first free slice its strong sweet but pungent scent at the same time, a mixture of autumnal undergrowth and a delicate smell of smoke.
Perfect at the aperitif table or in the buffet of appetizers during the autumn and winter season, we suggest serving it as freshly cut slices on a cutting board along with other smoked products of our production such as Cream of Smoked Lard or Smoked Lard, Smoked Spread Bacon, Smoked Fillet and Smoked Lonzino (Smoked Aged Pork Loin). Accompany it from bruschetta of toasted homemade bread, pickles and pickles and some strands of pecorino cheese. In this regard, a PDO Tuscan Aged Pecorino or a Aged Pecorino Cheese in Hay and Straw is perfect. And water everything with rosé or fruity wines that “degrease the flavor” or for a more intense combination, even a full-bodied and structured red wine.

Smoked Coppa:With which wine match it

Il Cerasuolo is a DOP wine from Abruzzo with a bright pink color and a scent of fresh red fruit with fine floral notes. It presents itself to the palate with a pleasant and fresh taste, with a good acidity and a long aromatic persistence.

It is perhaps the most renowned DOC wine of South Tyrol. From yellow to straw yellow to golden yellow, it has a well-structured body and a light scent, sometimes pronounced and pleasantly dry. It reminds the palate of a slightly savory aroma that blends well with slight spicy notes in which nuances of cloves, roses and lychees are also perceived.

Typical wine of Oltrepò Pavese and Piedmont, Bonarda stands out for its intense ruby red color. The nose has a sweet smell sometimes with hints of black pepper, while on the palate it has a dry taste, sweet or sweet, slightly tannic, sometimes lively or sparkling. Overall it is characterized by a balanced and complete flavor. 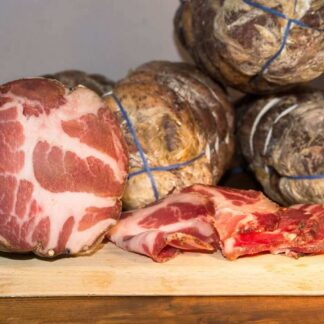