The chestnut flour of Bravi Andrea is made from chestnuts collected in chestnut groves in thecommunes of Garfagnana and Media Valle Del Serchio in the province of Lucca.

The oldest evidence of the presence of the chestnut tree in the mountains of Lucca comes from some rare documents of the VII-VIII century A.D. Since 1400, with the gradual growth of the population, increased the importance of the chestnut so much that its cultivation suffered a substantialintensification until it reached its peak at the beginning of the ‘800.

The chestnut tree is also know as “bread tree” because its fruits fed mountain population and it was an integral part of the lives of mountain people.

Garfagnana chestnut flour has a colour which varies from white to dark ivory; the flavour is sweet with a slightly bitter after-taste. It has the scent of chestnut and the texture is fine when you touch and taste it.

Chestnut flour has always been produced in the Valley of Serchio since antiquity. It was once considered the staple food of the lower middle class; the production techniques remained almost unchanged over centuries.

To produce chestnut flour, after eliminating unhealthy fruit, chestnuts are placed to dry in the “Metato”, on wooden laths, for at least 40 days; then they are subject of beating and later selected to eliminate the wormy and imperfect fruit. The grinding takes place in stone mill and obtained flour is stored and then packaged.

Keep in a cold and dry place. 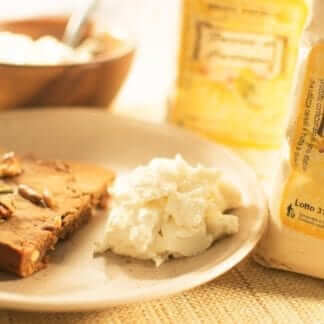